This is a low power LED flasher designed to be powered from a single AA battery with a current consumption of around 30 µA. 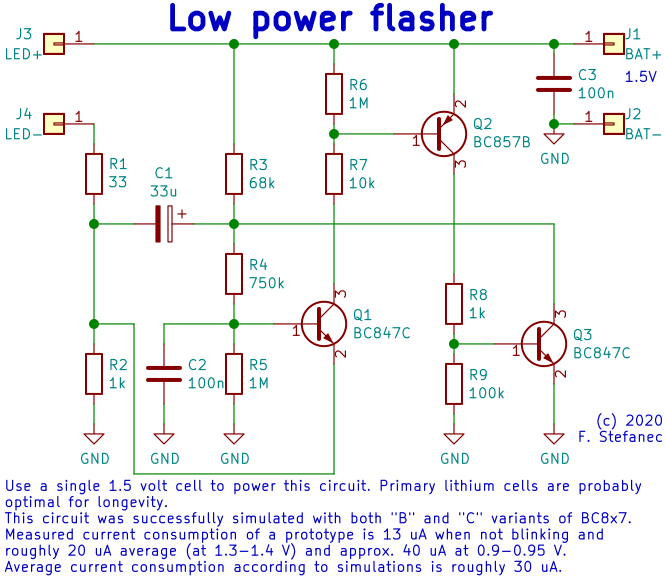 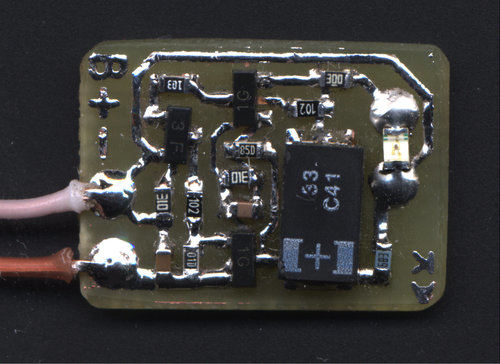 Principle of operation: the capacitor C1 (33 µF) gets charged through resistors R2 and R3. When the voltage on the B-E junction of transistor Q1 reaches around 0.5 volts, enough current starts to flow through the collector of Q1 to turn on the transistor Q2, which in turn turns on Q3, which connects the node between C1, R3, R4 to GND, causing the voltage on the node between C1, R1, R2 to drop by roughly -0.9 V with respect to GND. This raises the voltage across R1 and the LED to 2.4 V, which is enough to make it flash (the circuit is designed for a red LED due to its low voltage drop - the LED should be chosen so its voltage drop that causes it to barely light up is just a bit higher than the maximum battery voltage). The voltage between the emitter of Q1 and GND also drops, which increases the voltage on its B-E junction, fully turns it on and causes a short current spike (around 50 mA) to flow through the base as C2 discharges. As the capacitors discharge causing the base current to decrease significantly, all transistors turn off, C1 starts charging again, and the cycle repeats.

Resistors R7, R8 limit current to the bases of the corresponding transistors. Resistors R6, R9 prevent the transistors from amplifying any stray currents by "shunting" them. C1 must have a very low leakage current.

The current consumption is around 20-40 µA depending on the battery voltage, or potentially higher, if the battery voltage itself is high enough to light up the LED. With a consumption around 30 µA and 90% battery capacity usage, a run time of around 10 years can be expected with a 3000 mAh battery (typical primary lithium AA battery). A run time of at least several years is almost certain. Alkaline batteries might leak in that time.

The prototype was built on a single 18x14 mm PCB made using the photo-transfer method, assembled using mostly 0603 parts.