I don't take any responsibility for any damages caused by malfunction of this device. You do everything at your own risk.

A nine-volt battery is used to power this circuit. The current draw is approximately 5 mA.

The first part of this circuit (formed by parts U1A, R1, C1, R2) is a transimpedance amplifier amplifying signals from the photodiode. A particle hitting the photodiode chip will cause a tiny current to flow. The photodiodes are reverse biased. The bias voltage is filtered by resistor R3 and capacitor C2. The output of the first op-amp (U1A) is amplified by another stage (U1B, C3-C5, R2, R4). U1B should output pulses with amplitude around a few hundred mV. Resistors R13, R14 form a voltage divider setting the DC output voltage of the op-amps.

The output of the inverting amplifier is connected to the inverting input of U2A (first comparator). This input is also biased to about 3-3.3 V (adjustable by RV1) through R8. R8 and C5 form a high pass filter (~ 3 kHz). The non-inverting input of U2A is connected to the Zener diode (3,3 V). If the voltage at the inverting input gets higher than the voltage on the non inverting input, U2A discharges C7 through R10. The LM393 comparator has open-drain outputs, so it won't immediately recharge the capacitor. It will get recharged through R11. This sets the minimum pulse width for the indication LED (D4). When the voltage on C7 is low enough, U2B switches its output transistor on, which leads to D4 blinking and transistor Q2 switching on. Q2 will discharge C12 through LS1 (small buzzer/speaker, a beeper from an old motherboard with around 50 Ω is used here).

Zener diode D2 is used as the voltage reference for the comparators. The current through D2 is set mostly by R6. Zener diodes don't stabilize the voltage well when the current is too low, optimally, at least a few mA should be flowing through the diode. If the battery voltage is too low and thus current through R5 and R6 is lower than approximately 1 mA here, the voltage drop on R5 will be too low to turn on Q1, therefore the power indication LED (D3) stays off.

This circuit is very sensitive to external electromagnetic fields. It's recommended to put it in a shielded box. The PCB should be laid out carefully. Parasitic capacitances between the first stage and other stages should be minimized (risk of oscillations). Capacitors C8, C9 should be placed close to the respective integrated circuits. The sensitivity adjustment trimpot (RV1) must be set to a point where the circuit is sensitive enough to be activated by radiation, but not by its own noise (a large portion of which is created by the 10 MΩ resistor). The op-amp should have reasonably low noise, high input impedance, high enough gain-bandwidth product, appropriate voltage ranges, etc. I used KF442 (equivalent of LF442). With the cheap LM358 dual op-amp, the circuit was already too noisy. TLC272 seems like a good op-amp for this circuit, but I haven't tested it.

Changes - March 2021: an error in the circuit diagram (wrong polarity of D5) was fixed. Flashlight functionality and some comments were also added to the schematic diagram. 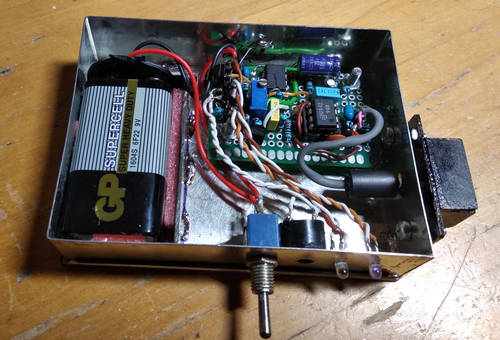 This is the finished device, using universal PCB. The layout isn't optimal and the device is quite sensitive to external electromagnetic fields.

Here is a video of the device operating.

The sensitivity is much lower than that of a "normal" detector with a GM-tube.