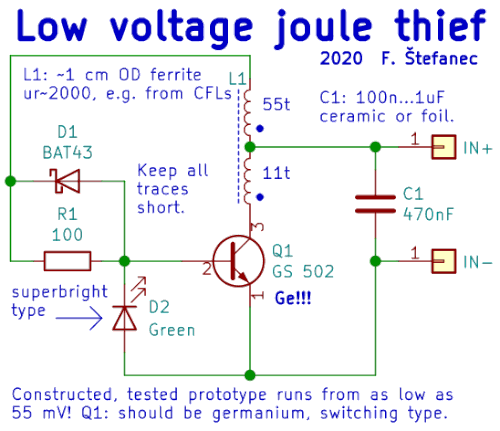 This is a variant of the well known "Joule thief" circuit. It's a simple voltage booster.

The principle of operation is simple:

A switching germanium NPN transistor is used (GS 502). The voltage drop of a germanium PN junction (0.3 V, but even 50-100 mV will likely cause some already significant current to flow) is much lower than that of a silicon PN junction (about 0.6-0.7 V at room temperature). The minimum input voltage for a Joule thief with a silicon transistor is thus about 0.6 V, but this modified version can run from much lower voltages. The constructed prototype operates with input voltages as low as approximately 55 mV. When powered by 1.3 V, the currents were already reaching the limiting values for this transistor. According to experiments, 0.7-0.8 V was a reasonable maximum for the prototype. This circuit can be used (for example) to power an LED from a Peltier module (even a classic Peltier module can be used as a thermoelectric generator). With a common Peltier module (TEC1-12706), the prototype started working with a temperature difference of about 2-3°C - it is capable of running on heat from a hand. A big problem of this circuit is very bad availabilty of suitable transistors, as they aren't commonly made anymore. However, it's possible to build a similar circuit with an JFET or a depletion mode MOSFET.

The core used for the coils comes from a broken CFL and has an outer diameter of around 1 cm. Any small ferrite core with similar parameters will probably work. Any similar Schottky diode can be used in place of D1. It is possible to use LEDs with different colors. Overall, the part values aren't critical, except the transistor - it should optimally be a switching germanium type at least similar to the GS 502 - it is better to test several types and pieces. The transistor is placed in a socket here. 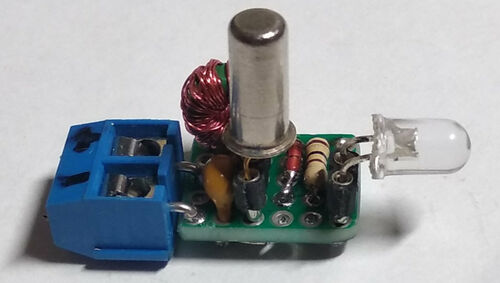